Twenty One Pilots Wiki
Register
Don't have an account?
Sign In
Advertisement
in: Singles, Vessel Songs, Regional at Best Songs,
and 4 more

Car Radio is the fifth song on the album Vessel. It was recorded in Los Angeles and is produced by Greg Wells. Car Radio also served as the fifth single from the album, released on March 18, 2014. The music video was posted to Fueled by Ramen's YouTube channel on April 19, 2013. The song was originally recorded for Regional at Best, and was released in 2011, before the album was discontinued following the band's first major label signing.

This next song, “Car Radio”, is an interesting one. I really don’t remember making decisions on the structure, it just happened and I don’t remember slaving over when to bring in the beats, when to stop the beat…it just—it was one of those songs that just kind of happened for me when I was demoing it out, it just—the structure just seemed so natural to me. And when I was done with it and I was showing other people, that’s when I realised that it’s a very unnatural song…but it just worked for me, so that’s kinda why I stuck to it. It’s one of those songs where, when we show people our stuff for the first time, they don’t really get that one, but I kinda like that. And so the song “Car Radio” actually is about—I was going to college, and my car radio got stolen out of my car and, I don’t know if anyone’s like me, but whenever you get into a car the first thing you do is turn on music and I was unable to do that for a while. Of course, I’m an emotional dude so I wrote a song about it. But it was interesting to see how, when I remove the distraction of music from my life and my car, where my brain would go. You know the thoughts that would go through my mind. It was interesting and I still encourage people to take some time to just sit in silence every once in a while ‘cause a lot of things can come out. A lot of things that need to come out, come out, so that song reminds me of that time in my life and that lesson that I learned. 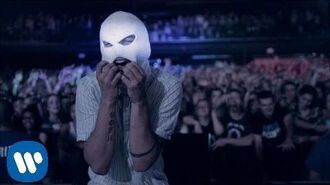 “Car Radio” was originally recorded for Regional at Best, but following the band's signing with Fueled by Ramen and subsequent discontinuation of the album, the song was re-recorded and included on the album Vessel. 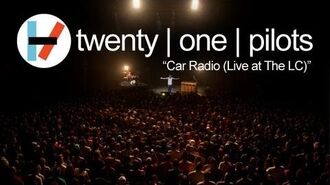 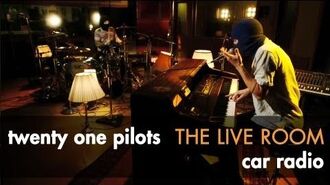 Twenty one pilots - "Car Radio" captured in The Live Room 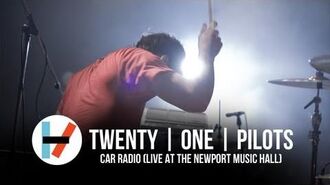