Twenty One Pilots Wiki
Register
Don't have an account?
Sign In
Advertisement
in: Songs, Trench Songs, Trench,
and 4 more

Jumpsuit is a song by Twenty One Pilots. It is a track featured on their fifth studio album, Trench. It was released alongside "Nico and the Niners" on July 11, 2018.

The official video for Jumpsuit was released at the same time as the single. It was directed by Andrew Donoho. 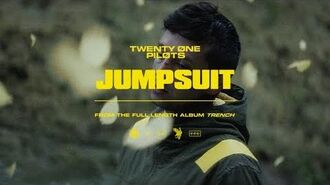