Twenty One Pilots Wiki
Register
Don't have an account?
Sign In
Advertisement
in: Vessel, Fueled by Ramen, Vessel Songs,
and 5 more

Migraine is the third song on the album Vessel. It was recorded in Los Angeles and is produced by Greg Wells. Migraine was also released in the UK as an EP on June 14, 2013, and served as the first track.

This next song is called Migraine and it’s probably some of my favourite verses. The content is something that I worked very hard on. When it came to the lyrical side of it everything kind of came together. I got the idea from—I actually did have a headache the day that I was writing it for sure, but then that wasn’t really the point, you know, I was trying to make that a metaphoric thing, where there’s a lot going on in his head…and what’s really cool is that this is one of those songs that as a songwriter, I like to kind of just emit some sort of message, almost like a ripple in the water and when I feel that ripple bounce off of someone else who resonates with what it is I’m going through and it starts coming back at me it’s just a really cool feeling of you know, I’m not alone in what I’m going through. So Migraine is one those, kind of, almost a distress call type of song lyrically—and then it’s [got a] pretty dirty beat too.

The music video for Migraine was released on Fueled by Ramen's Youtube channel on May 22, 2013. Due to Migraine's EP release being a UK exclusive, the video was also a UK exclusive. 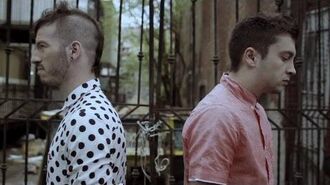 A live performance of Migraine at the LC Pavilion was included in the UK exclusive EP. Migraine (Live at LC Pavilion) was recorded at a show on October 19, 2012.